Nestled in the hill 300 feet above the city of Heidelberg stands the breath-taking Heidelberg Schloss (castle). The castle is a combination of several buildings surrounding an inner courtyard, put together with a haphazard look. Each building highlights a different period of German architecture.

The castle has a history almost as old as the city itself. The first parts of the castle were constructed around 1300, but it wasn’t before Prince Elector Ruprecht III (1398 – 1410) that the castle was used as a regal residence. Until it was destroyed by lightning in 1764 leaving it permanently uninhabitable, the castle was the residence for most of the Prince Electors. In 1800, Count Charles de Graimberg began the difficult task of conserving the castle ruins. Up until this time, the citizens of Heidelberg had used the castle stones to build new houses.

Just as breath-taking as the castle is from the city, so too is the city from the castle. From either the Great Terrace or the gardens, one has an amazing view of Heidelberg, the Neckar River, and the Neckar valley far into the Rhine plain. On a clear day, Mannheim is even visible on the horizon. 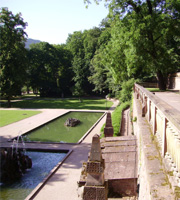 Get married at the castle! As of February 2009, couples will have the ability to get married at the Heidelberg Schloss. What a wonderfully romantic place to be able to say "I do"! Dates go quickly, so book yours as soon as possible.

The castle gardens, constructed between 1616 and 1619 by garden architect Salomon de Caus, were commissioned by Prince Elector Friedrich V for his wife Elizabeth. Before being destroyed during the War of the Palatine Succession in 1693, the gardens were regarded as a masterpiece of their time. The gardens, built upon several terraces, were made up of many flowers beds, mazes and arbours, numerous sculptures, a heated greenhouse with orange trees, large fish ponds, waterfalls, and a man-made grotto for musical water arts.

The Heidelberg Tun, or the “World’s Largest Wine Barrel”, was built in 1751 by Prince Elector Karl Theodor to house the wine paid as taxes by the wine growers of the Palatine. It stands seven meters high, is eight and a half meters wide, holds 220,000 liters (58,124 gallons) of wine, and has a dance floor built on top of it. The court jester who guarded the cask during the reign of Prince Elector Carl Philip, a Tyrolean dwarf nick-named Perkeo, was supposedly known for his ability to drink large quantities of wine. Legend has it that he died when he mistakenly drank a glass of water.

On the lower floor of the Otto Heinrich Building (Ottheinrichsbau), is the Apothecary Museum. This unique museum allows the visitor to learn about the history of the pharmacy and of dispensaries. The collection includes a complete pharmacist’s office, a laboratory, pharmacopoeias, manuscripts, a wide array of vessels, mortars, and technical flasks, and over 1,000 raw drugs representing medicine from the 17th to 19th centuries. 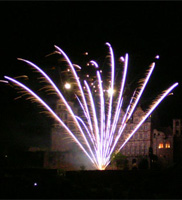 There are three times every summer when the well-known Schlossbeleuchtung and fireworks display takes place – the first Saturday’s in June and September, and the second Saturday in July.

The castle lighting is done in memory of the three times when the castle went up in flames (1689, 1693 and 1764). The first two times were due to wars with the French, and the last time by lightning.

After the castle “burning” begins, a 15 minute fireworks display is launched from the Old Bridge.

How to get there:

There are four ways to get to the castle – car, bike, funicular, or walking.

Car: This method is not highly recommended, as there are few parking spaces. But it is possible. Just follow the signs. (There are particular times during the year when the road is closed to cars, so double-check first.)

Bike: This follows the same route as the car.

Walk: Next to the Rathaus and Kornmarkt is Burgweg, which is the path that leads up to the castle. The path splits in two - the short route (with steps), and the scenic route (no steps). After picking a direction, just follow the signs up to the castle.